Eufloria is a beautifully styled, incredibly addictive game of space exploration and conquest that avoids all genre clichés and employs surprising themes of plant growth and bio-mechanical evolution.

The HD version has been co-developed with fellow indies Alex Amsel and Mark Fitt of Tuna. The game allows the player to explore a beautifully realized universe rendered in a style that is both unique and compelling. Eufloria's aesthetics are reminiscent of children's books like "The Little Prince" and is supported by an original ambient soundtrack by Brian Grainger offering no less than 3 hours of wondrous ambient music.

Gameplay revolves around conquering asteroids in space and using their resources to literally grow and nurture new plants and creatures to do the player's bidding.

The player is pitted against several teams of AI opponents that all vie for the same resources and can offer fierce opposition. The game offers casual style touch controls and ease of play, but allows for very deep strategic gameplay, married to artistic but user-friendly graphics. This makes the game easy to learn, hard to master, and addictive and approachable to most types of game players.

Most of the content in the game is procedurally generated, and each play session is therefore unique.

Rudolf once described the game as follows:

Eufloria [...] isn’t really like other games. It has strategic gameplay, but no technology trees or complicated interface. It allows for exploration and expansion without being punished for small mistakes. It offers challenges that are fun, but in a style that can be described as “ambient gameplay”. There is conquest but there are no space marines in sight at all. Instead, all of Eufloria’s gameplay is based on growing your strategic and colonising life forms on asteroids that you conquer throughout the game. That is right: you are basically playing a game of intergalactic guerrilla gardening. Oh, and you engage in massive baIles against enemy plant life. 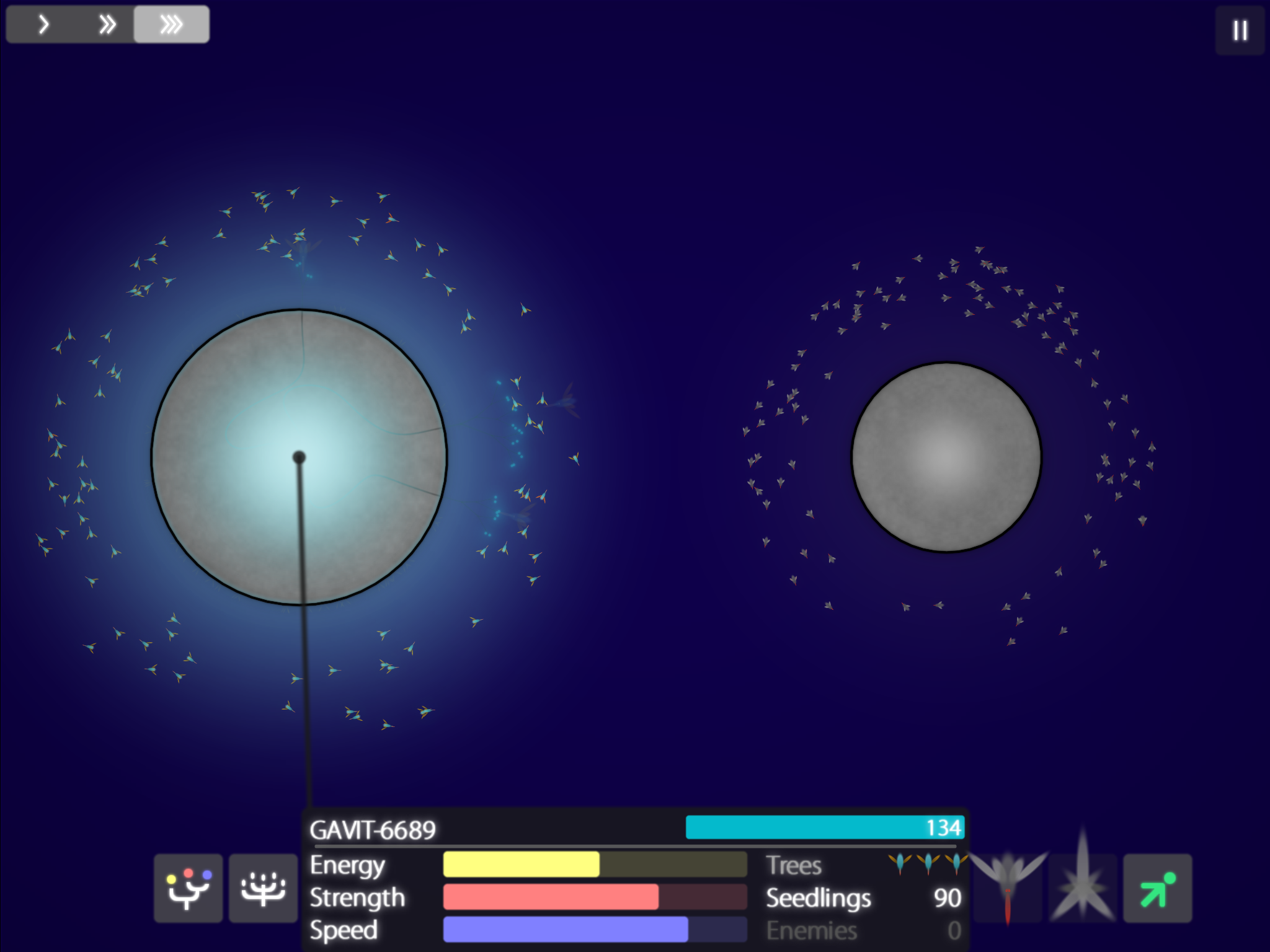 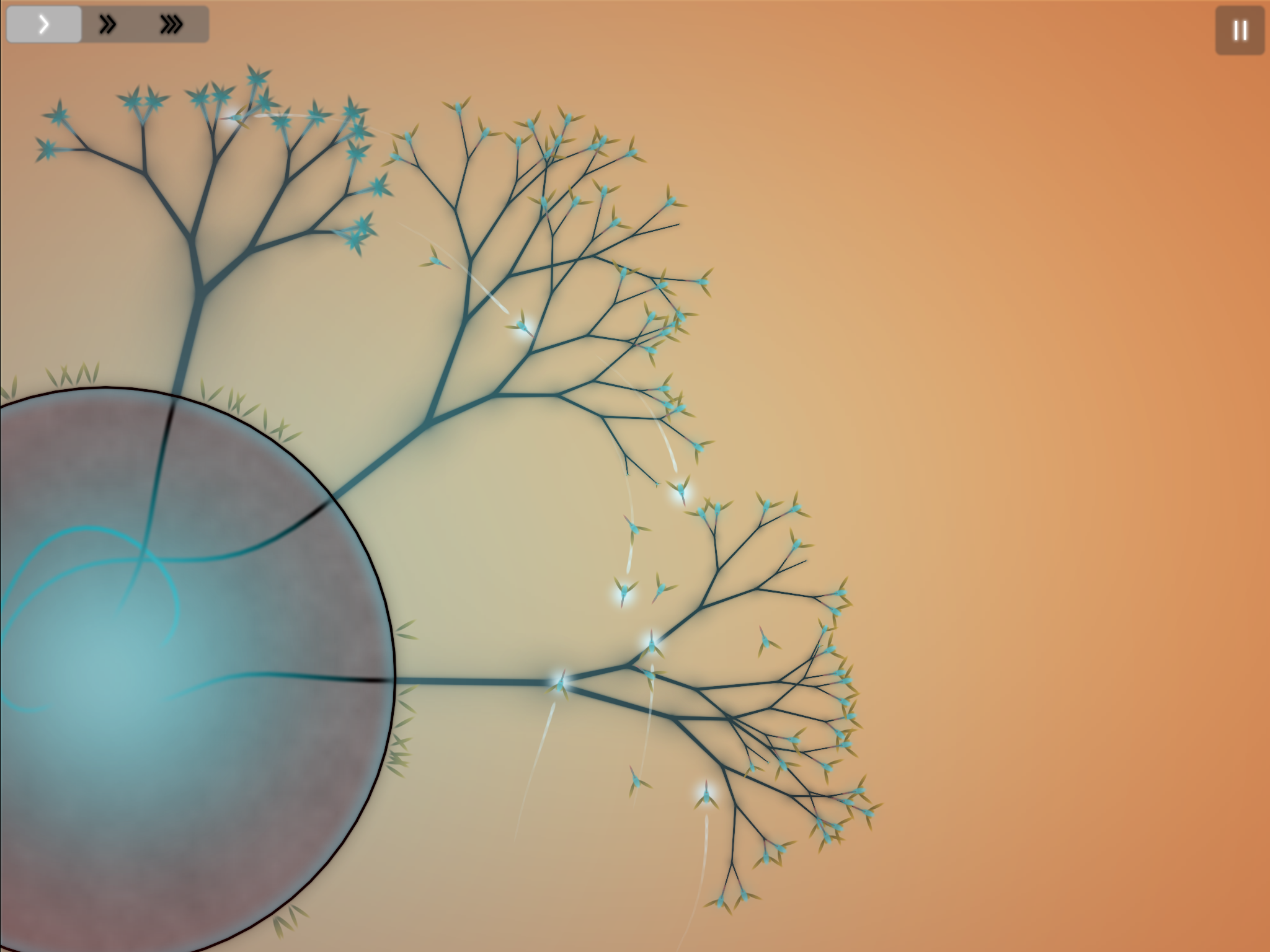 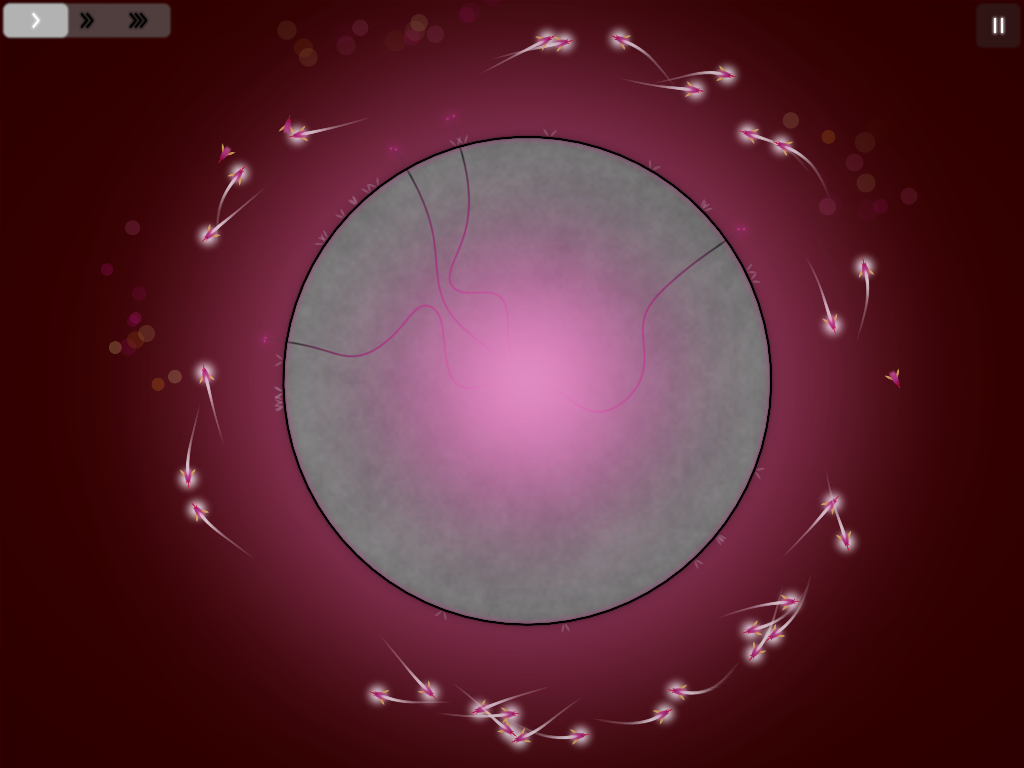 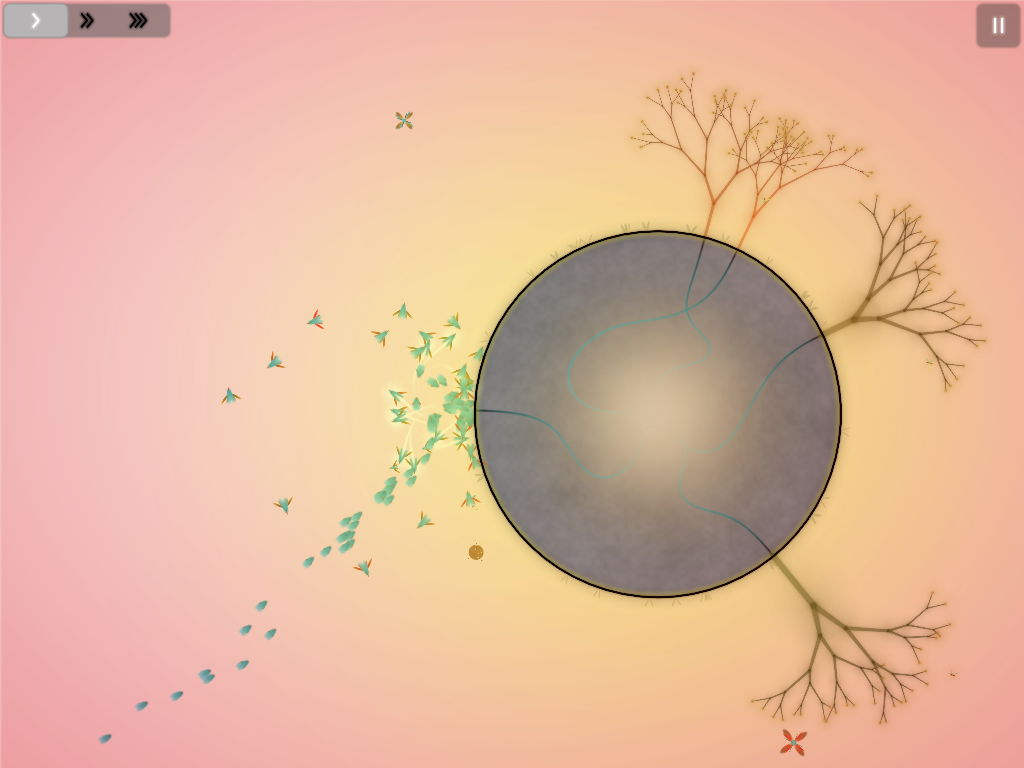 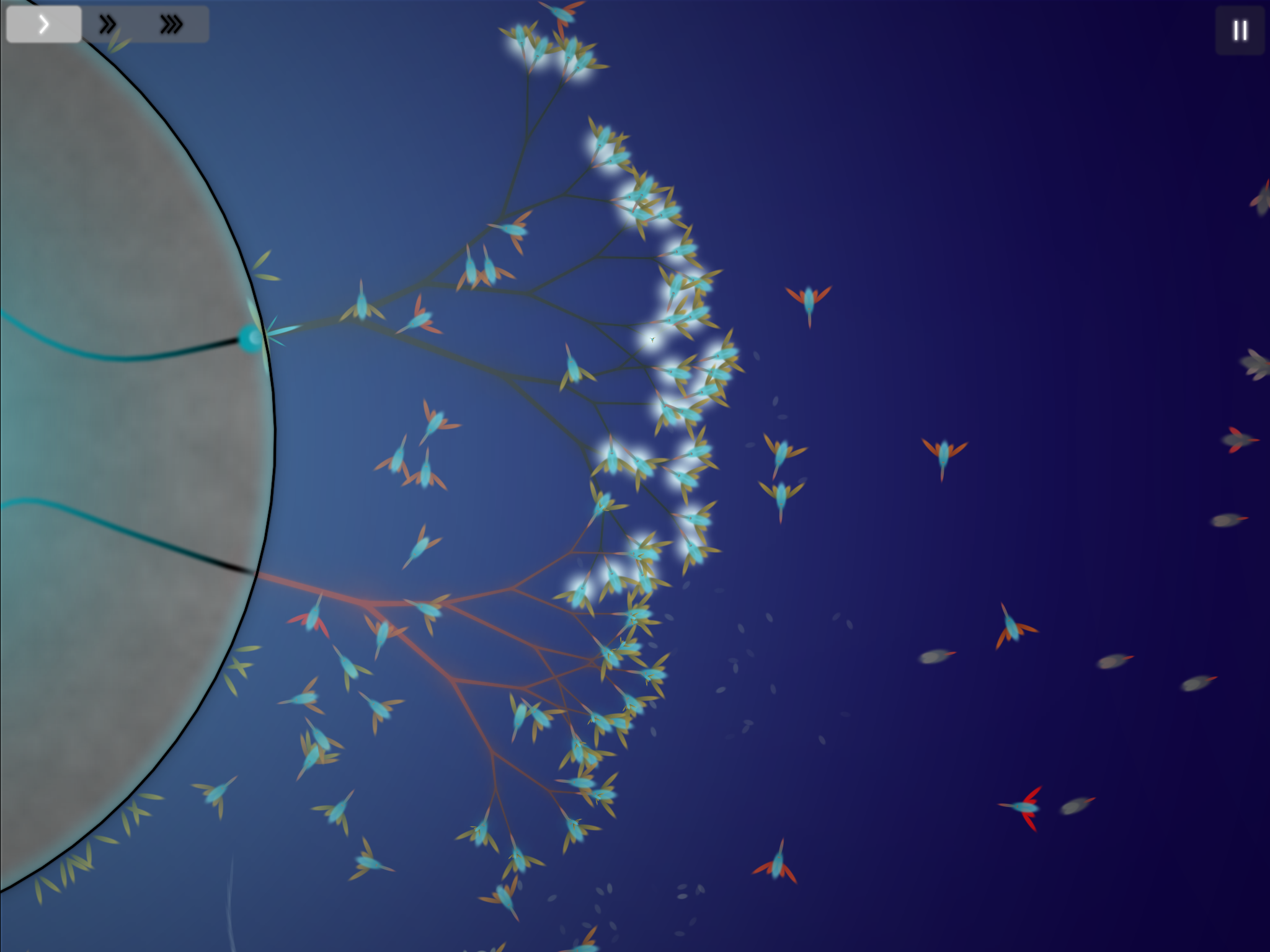 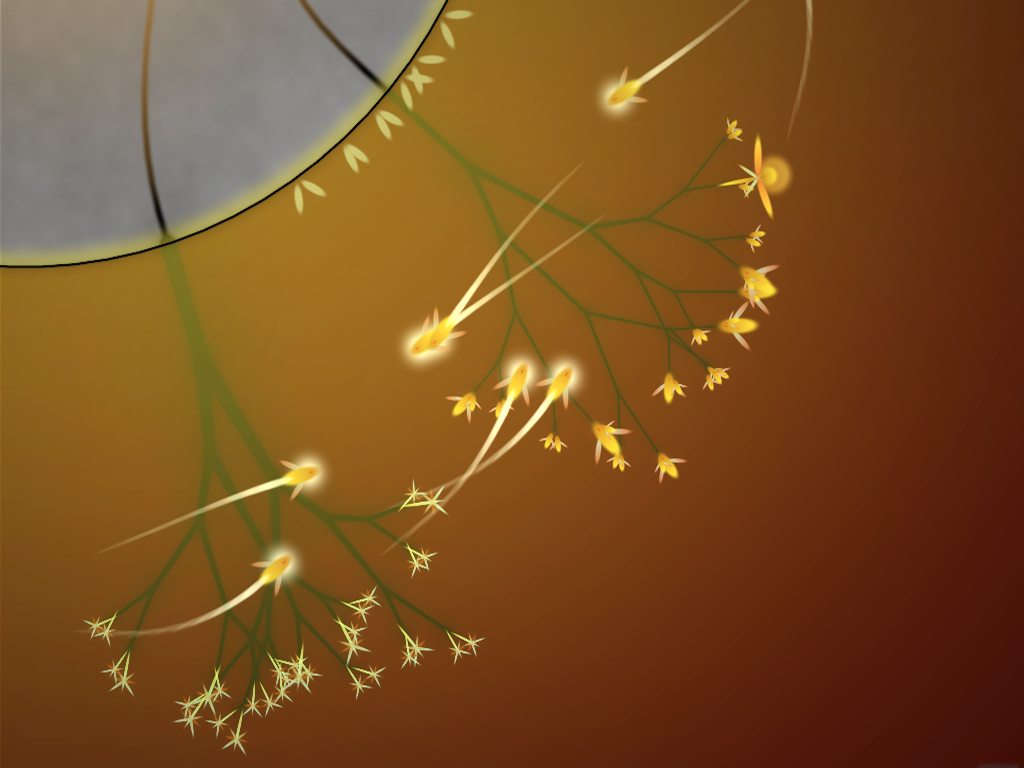 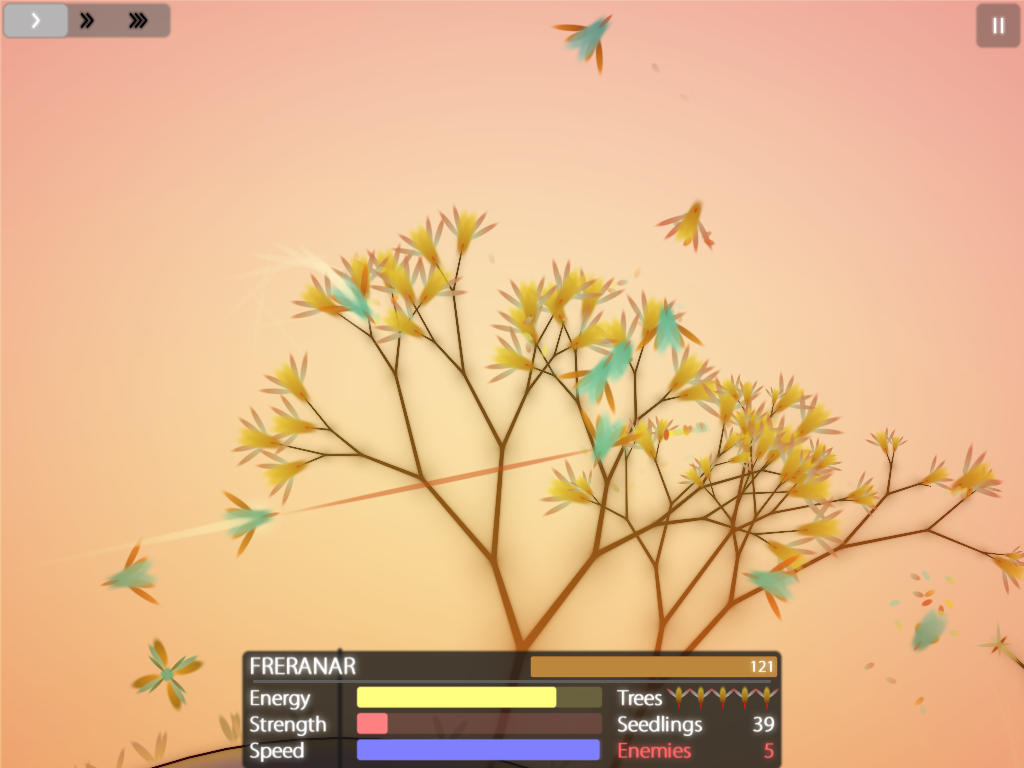 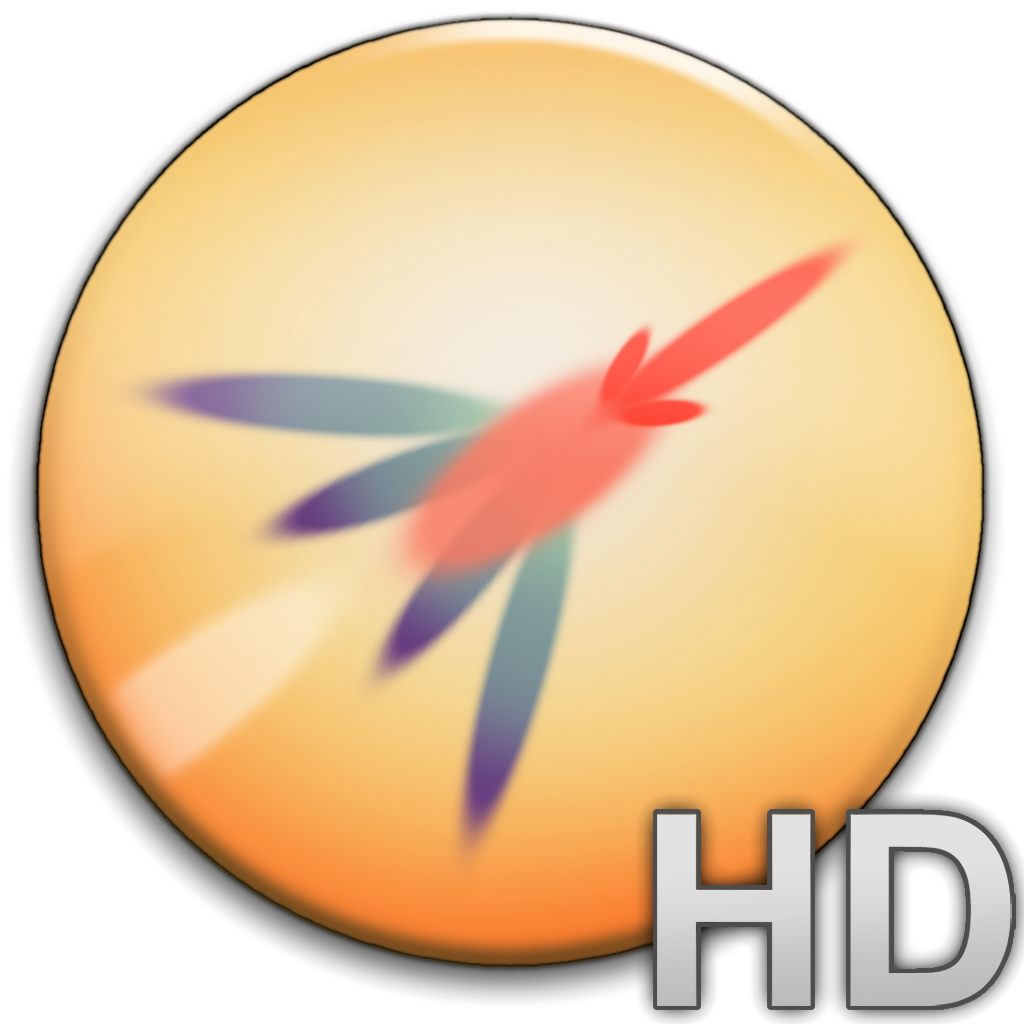 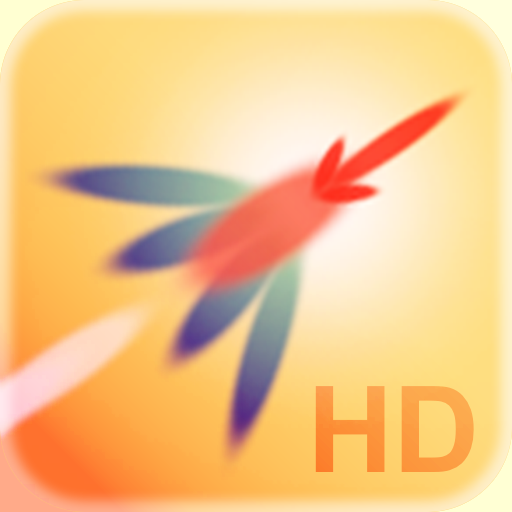 “It’s hard to express how much we love Eufloria“

Pocket Lint (App of the Day)

“Soothing ambient music, beautiful abstraction... one of the most enjoyably relaxing wars we’ve ever waged“

“The most stylish and unique RTS you've ever seen“

“A beautiful and entrancing addition to the iOS library.“

“A truly standout game on the platform.“

“It’s truly in a league of its own“

“This game is fast becoming an instant iOS gaming classic“

“Elegantly simple and startlingly beautiful, it deserves to be played by everybody.“

It took us a while to get here, but it was a fun journey.

An earlier version of the game called Dyson was developed for the TIGSource Procedural Game Competition. It was originally partly inspired by the work of theoretical physicist Freeman Dyson, and has been available as a freeware exploraAon of procedural gameplay. Freeman Dyson hypothesized a terraforming tree that would help exploit and colonise asteroid fields, and has wriaen frequently about self-replicating autonomous robots. A further inspiraAon was the work of Phillip K. Dick (Especially the story Autofac, about a never ending war) and people like Karl Simms, one of the trailblazers in the field of evolutionary AI.

An interview with Rudolf produced this quote about the origins of the game:

Well, it was a combination of factors. I always wanted to do a procedural asteroid mining game, and Alex was already working on procedural stuff for his game Deadrock. Alex suggested we inverted the gameplay so instead of creating things inside asteroids we "grow" them on the outside. The floral theme was added, and Alex came up with the look.

The game later adopted a commercial dimension, and to reflect this reality the game’s name changed to Eufloria, then Eufloria HD in its most recent incarnation, chosen out of 400 entries offered in a renaming competion. The name changes partly came to be because the game had grown so far beyond the original release that it made more sense to introduce it as a separate title.

Unlike most games, Eufloria has been iteratively developed. With each new platform, more has been added to the game and the level of polish has increased.

The fully independently developed game was an Independent Games Festival finalist and the festival’s Grand Prize and Direct2Drive Vision award nominee. It has garnered a large and loyal online following, and many rave reviews in various publicaAons for its earlier incarnaAons. The original Eufloria had a thriving modding community that regularly came up with amazing new content for the game.

The game was also selected for the Tokyo Game Show – Sense of Wonder Night, where we presented some aspects of the game in this ten minute talk.

It was on mobile plagorms in 2012 where the game really came into its own, and has garnered more praise than we ever dared hope for. Eufloria was nominated for a BAFTA and was Apple's iPad Game of the Year Runner Up in 2012, and we hope that the game will continue to entertain and surprise people. Indeed, in 2013 it received another award nomination, this time for Most Innovate Game in the Best Ever App awards, and the year was crowned by Eufloria HD receiving three major awards at the Big Chip 2013 awards; Best Use of Gaming, Best Visual Design, and Best of All in the Grand Prix award.

Rudolf is a game design veteran who has worked on a plethora of games ranging from small and fun titles for handheld systems to multi-million selling games and franchises on consoles and pc. His professional experience includes work on original new IP as well as famous established brands like Harry Potter, Championship Manager and Hitchhiker's Guide to the Galaxy. Industry experience notwithstanding he prefers his current life as an independent game developer.

In addition Rudolf is also an author whose book Level Design: Concept, Theory & Practice has been published by by A.K. Peters Publishing in October 2009.

Alex May is a respected programmer with over 10 years of industry experience. He has been involved with a number of very well known licenses including Buzz and Avatar the last Airbender. Alex is a well known and very active in the indie games community working on innovative and high quality titles. His game Cottage of Doom won the Tigsource B-Game competition.

Alex is an industry veteran of over 15 years. He has worked across many interactive platforms, utilising both internationally renowned brands and innovative concepts. Alex has participated and spoken at a variety of events such as Develop, DocFest, GameHotel Switzerland, Zurich School for Design, Crossover, Game Republic, and GDC San Francisco.

Brian Grainger is a multitalented and prolific musician and audio specialist whose output is enormous and of high quality. He has released over 50 albums, remixed for many people and runs his own record company. Brian is an avid computer and console gamer, and hopes to continue audio design and soundtrack work within the gaming industry.

Omni has been set up as a new kind of independent games (and other media) company, offering an alternative to corporate restraints and rewarding developers in a way that traditional game development often does not allow.

Current projects of note are two new games: StarLit and Neopolis, and a comic called Spire.